Skip to content
Jacquie Cutts (CEO and Founder of SAFE), Richard Cutts (SAFE technical director), and Rachel Fisher (SAFE intern) have been hard at work in Uganda this past week, installing Solar Suitcasess and training health workers and SAFE’s in-country staff at several hospitals on how to operate, install, and repair the devices. Through the effective and sustainable implementation of these machines, they are certainly making the Light the Night project – in collaboration with WE CARE Solar– a great success. 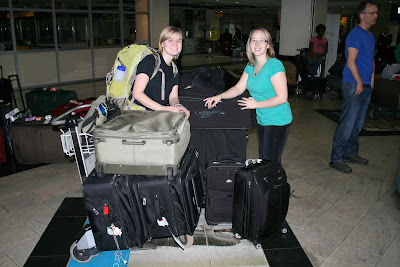 On Sunday, December 18th and Monday the 19th, the group had several meetings with community leaders and partner organizations to discuss the installation of the devices. At the first stop, Ibulanku Health Center, the group met with the individual in charge, Sulamain Lule, who was very excited about the installations of the Humless units, which he said, according to Jacquie, will be a great step in “strengthening all the facets of the local health system.”

As Jacquie explained, “installing the older version Solar Suitcase at Bukoteka, then the Humless units at Ibulanku, fixing Busesa’s panels, and installing the new Solar Suitcases (with expansion packs) at the Iganga District Hospital will help to ensure quality care at each step in the chain of health care delivery.”
The next stop was the village of Busembe, Kalalu Parish in Iganga District, where the group checked on SAFE’s projects and discussed plans to hold a community health fair day on December 26th with Ugandan groups Women’s Voice, Bugya Bukye, and KAMEDE (Kalalu Men’s Development Association). SAFE will provide HIV and malaria testing and counseling, immunizations (specifically targeted at women and children), malaria treatment, and mosquito nets for 300-400 people expected to attend.
On Monday, the group met with Dr. Susan Wandera Kayizzi, the Deputy Country Director of AMREF Uganda in Kampala, who helped to work out the logistics for the arrival of the rest of the Solar Suitcases, and described her experiences doing caesarian sections with the unreliable lighting caused by power outages, particularly this past year. 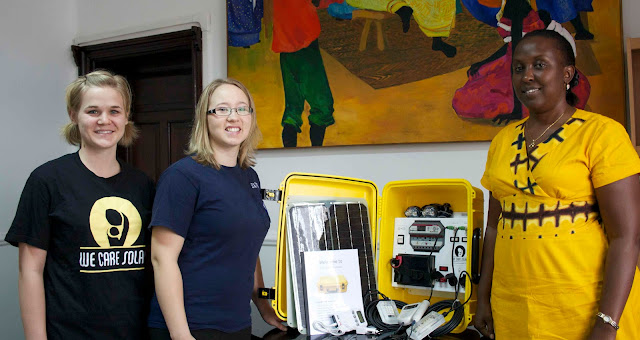 Tuesday saw more meetings, with the White Ribbon Alliance and UNICEF, and the completion of two Solar Suitcase installations with accompanying training, especially for the UNICEF workers who will be finishing the installations once the group departs. The first installation was at Kyampisi Heath Center III, a UNICEF-affiliated health center, and the other at Kyetume Health Center III. 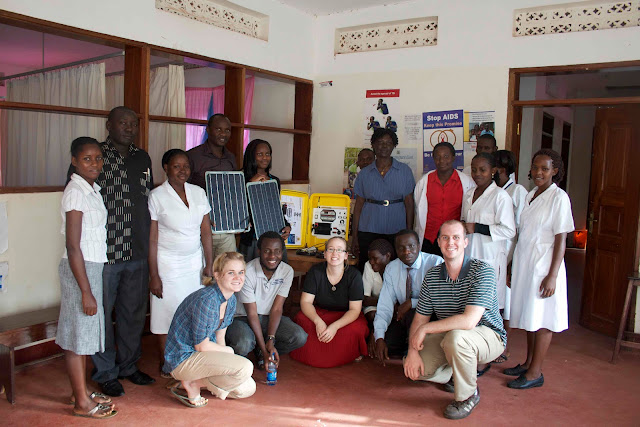 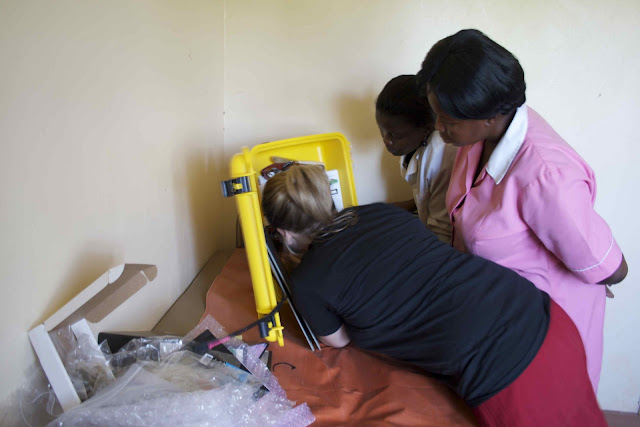 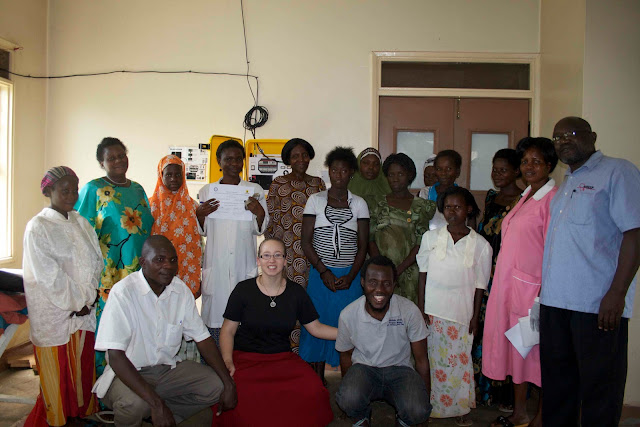 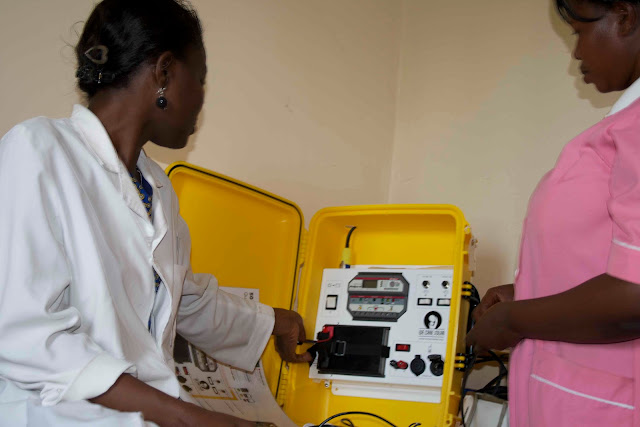 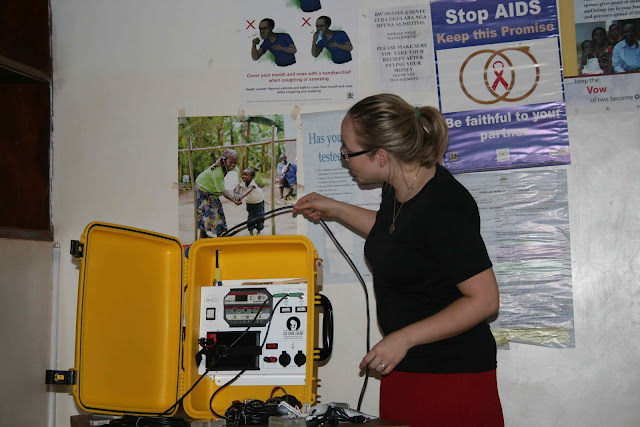 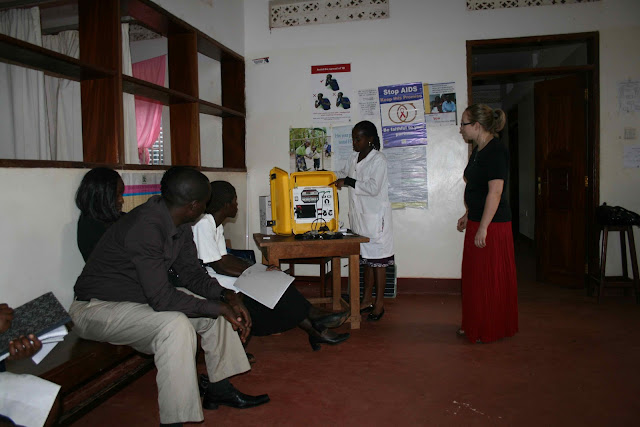 After the installation at Kyampisi, Jacquie showed a midwife and clinical officer how to use a fetal Doppler, which allowed a pregnant woman who was there for prenatal care to hear her baby’s heartbeat. Jacquie also spoke with them about the Solar Suitcase: 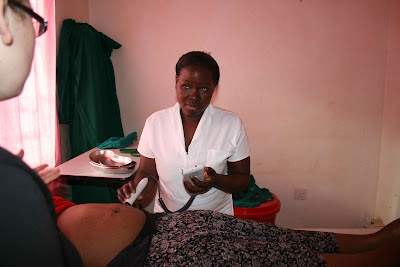 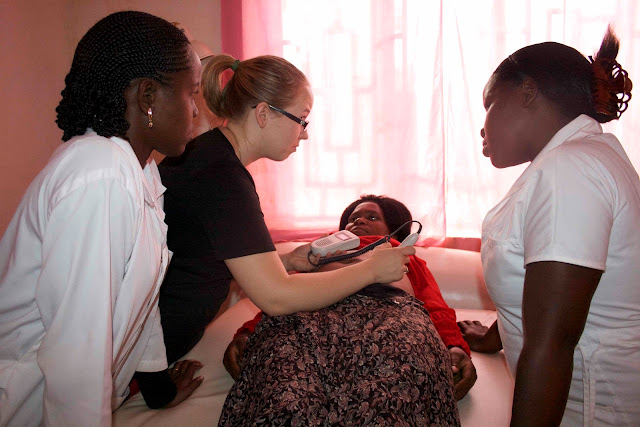 “I talked about how it was now their Solar Suitcase—that it was for them, their babies, and their families, so that the health providers could provide better care. I talked with them about helping the providers ensure that the Suitcase was used properly, that it wasn’t used to charge other people’s phones, and that nothing would get stolen, because then the power wouldn’t work anymore. They all promised to “join hands” in “their project.”

On Wednesday, the group installed one out of the two Solar Suitcases at the Iganga District Hospital. Despite some challenges with time constraints, the SAFE group was very happy to have done this installation, for unsurprisingly that night there was a power outage during an emergency cesarean section. But, according to the OR nurse, the Solar Suitcase remedied the problem very effectively:

“We just switched on the light and then we finished. We did all of them, and we took it into the first room too, so that we could treat the motor vehicle accident patients.” 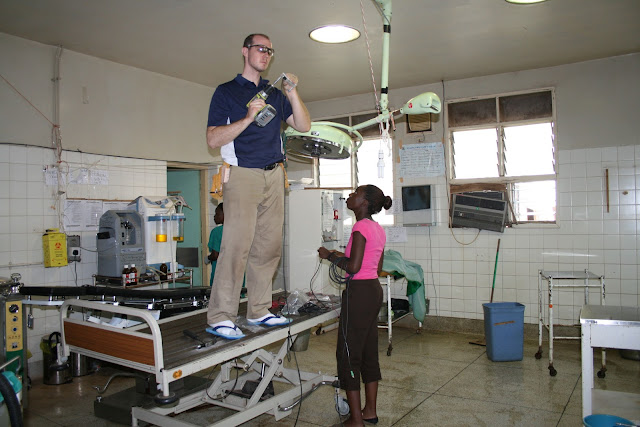 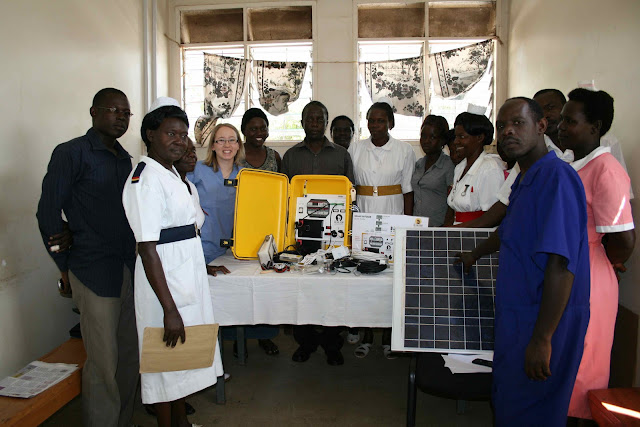 The Light the Night project is already truly making a difference in its early days. Check back soon for more exciting updates!
Last weekend, SAFE Founder Jacqueline Cutts and Technical Director Richard Cutts (along with their son, Jacob) headed to Berkeley, CA to be trained in the installation, repair, maintenance, and usage of the Solar Suitcase. Later this month, SAFE will receive 20 Solar Suitcases to install in Ugandan health facilities, including the clinics with which we regularly work on other maternal and child health projects, in addition to the health centers and hospitals affiliated with several other partner organizations (including AMREF, UNICEF, and the Uganda Development and Health Associates, among others). We would like to give a HUGE thank you to the Segal Family Foundation for making this possible, as well as to WE CARE Solar for the incredible project, superior teaching skills, and partnership!!